Things to Do in New Orleans: Year-At-A-Glance 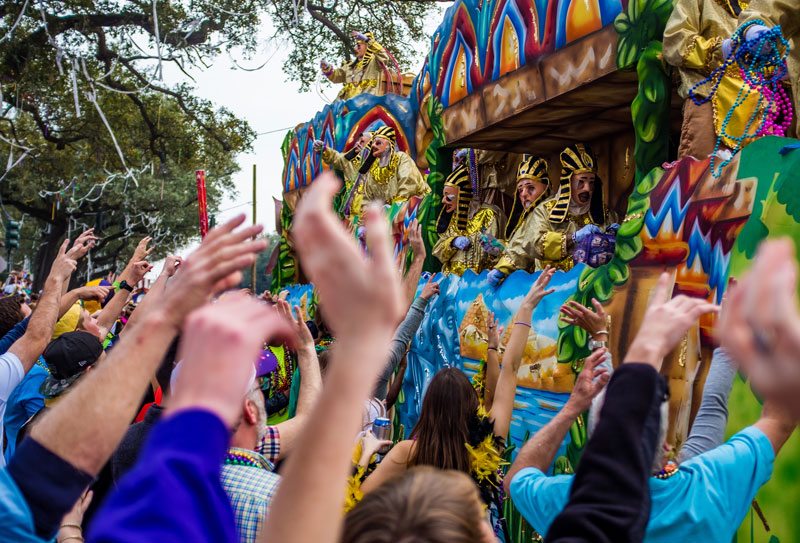 The New Orleans dance card is full all year round, from major music and culture events like Jazz Fest to honoring just about every type of food we enjoy in Louisiana with its own festival, to the unique traditions like Super Sunday and Reveillon. Check out these annual events grouped by the season.

The weather is mild, the streetcars are decked with wreaths, and the city is alight with the holiday sparkle. The family-friendly Celebration in the Oaks and NOLA ChristmasFest keep the dazzle going. The ChristmasFest is the only indoor Christmas festival in the area, taking over the Convention Center starting in the third week of December and wrapping on New Year’s Eve. The fest features giant slides, inflatables, rides, a gingerbread house display, and New Orleans’ only ice-skating rink.

Celebration in the Oaks is a beloved New Orleans tradition that has been around for over 30 years. It’s a dazzling display of holiday lights scattered throughout the 25 acres of the City Park, including the Botanical Garden, Storyland, and Carousel Gardens Amusement Park. The park is swathed in hundreds of thousands of twinkling lights, with hundreds of visitors strolling through the grounds, riding the historic carousel and the miniature train, photo-opping with the iconic Mr. Bingle, and enjoying the caroling and the holiday shopping. Celebration in the Oaks typically opens on Thanksgiving weekend and runs up to the first week of January.

During the second weekend of December, the LUNA Fête light show illuminates the Convention Center. The annual large-scale light and sound installations are fascinating, and the fest is free and family-friendly.

The bonfires on the bayou, concerts at St. Louis Cathedral and Reveillon dinners are also the New Orleans holiday traditions that make the season so special. The New Year’s Eve in Jackson Square, the Sugar Bowl in the Superdome, and the popular Tet Fest, which celebrates the Lunar New Year with the help of the largest Vietnamese communities in the country, all ring in the new year. The Dick Clark Rockin’ New Year’s Eve near the historic Jax Brewery in the French Quarter features a live fleur-de-lis drop at midnight and the countdown on Jackson Square, followed by the fireworks over the Mississippi River and the night of revelry.

Just when the rest of the country settles down we’re just getting started, with the Twelfth Night marking the beginning of the Carnival season (always on January 6) with three parades. Phunny Phorty Phellows board the St. Charles streetcar line Uptown and ride it to Canal Street and back, with toasts and revelry along the way. In the French Quarter, the Krewe of Joan of Arc walking parade rolls from Jax Brewery and celebrates St. Joan’s birthday with medieval pageantry. Société Des Champs Elysée rounds up the night of festivities. Time for the first beads of Mardi Gras and king cake!

Mardi Gras (“Fat Tuesday”) always falls on a Tuesday, but the actual dates, occurring sometime between February 3 and March 9, change every year depending on Easter, tied to the Catholic calendar and counting 47 days before Easter Sunday. This year, Mardi Gras falls on Tuesday, February 21, 2023, and there’s much to see and do.

Once that’s over, it’s time to celebrate Valentine’s Day in one of the most romantic cities in the country! Need ideas of what to do as a couple near the hotel, in the Uptown area of New Orleans? We have suggestions!

The lovely weather brings the festival season this time of year, with the Tennessee Williams Literary Festival (don’t miss the “Stella!” shouting contest on Jackson Square) and Tremé Creole Gumbo Festival in March. Also on the menu is the massive annual celebration of St. Patrick’s Day, including several parades and block parties, and the Mardi Gras Indians Super Sunday, a treasured tradition dating back to the 19th century and held on Sunday closest to St. Joseph’s Day (March 19).

The spring’s heaviest hitter is, of course, the New Orleans Jazz & Heritage Festival, with its multiple stages and excellent lineup. The Bayou Boogaloo is held over three days in late May on the picturesque banks of Bayou St. John in Mid-City, and the Freret Street Festival in March is getting bigger every year. Then there is the immensely popular French Quarter Festival, held in April. It’s one of the largest free music festivals in the U.S., with multiple stages set throughout the French Quarter.

Crescent City Classic, the annual 10K run, is one of the largest athletic events in New Orleans. It’s usually held on the Saturday before Easter Sunday each year. Runners take off from Jackson Square, run through the French Quarter and the Tremé, then up the majestic Esplanade Avenue all the way to City Park.

Ready for more parades? New Orleans is one of the most Catholic cities in the country, and it celebrates Easter (Sunday, April 9, 2023) with three big parades, brunches, and parties all over the city.

Hotel rates are at their lowest and there’s plenty to do indoors to escape the heat. Presented by the Jazz & Heritage Foundation, the Louisiana Cajun Zydeco Festival is a free weekend event held at Louis Armstrong Park in June. The best restaurants and bars in town celebrate Restaurant Week New Orleans in June, the ever-growing Tales of the Cocktail in July, and COOLinary New Orleans with prix fixe menus in August. You can also browse the galleries on the White Linen Night (or its cheeky cousin, the Dirty Linen Night).

The city comes to life for the Satchmo SummerFest and a slew of events over the Fourth of July and the Labor Day weekends, like Go 4th on the River, the Essence Festival at the Superdome, and the incomparable Southern Decadence festival.

The French Market Creole Tomato Festival is one the smaller fests to enjoy, and Running of the Bulls brings Encierro to New Orleans, except the bulls are the Big Easy Rollergirls! And, speaking of running, the Red Dress Run, held on the second Saturday of August, is a fun fundraiser to don the red outfit and brave the heat for.

The temps are down and it’s time to hit the city’s parks and squares. The endless stream of food and drink fests continues with Boudin, Bourbon, and Beer; NOLA on Tap (the largest beer fest in the Gulf South that benefits the LA SPCA), Tremé Fall Festival, Crescent City Blues & BBQ, Oak Street Po-Boy Festival, and the Fried Chicken Festival. Phew!

Held on the first Saturday in October, Art for Art’s Sake has grown and into a citywide phenomenon since the ‘80s, packed with openings at Julia Street galleries and special events along Magazine Street.

The fall in New Orleans also means the Saints football. New Orleans does Halloween like no other city, including the Krewe of Boo parade and the massive Voodoo Music + Arts Experience held in the City Park.

Rounding up the fall festivities is a four-day feast of events, when the Tigers of Grambling State meet the Jaguars of Southern University for the annual Bayou Classic, starting with a Thanksgiving parade and featuring a slew of amazing marching bands. Thanksgiving Day is also a traditional opening of the season at the racetrack, when the locals and visitors alike don their most elaborate and outrageous hats and stream to the Fair Grounds, kicking off the holiday season in a uniquely New Orleans style.

As you can see, there’s something always going on in New Orleans throughout the year, and we’d love to see you no matter what season. If you find lower rates on your Alder Hotel room(s) at the time of booking, call 1.888.626.5861, and we will match those rates! Stay in touch and save on rates and more at the Alder Hotel at https://alderhotel.com/email-offers/!