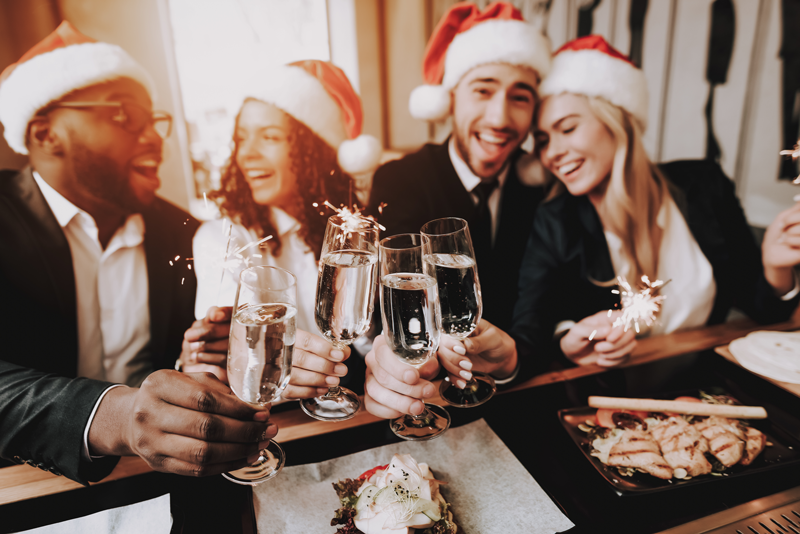 The holiday season in New Orleans is a magical time to visit. The weather has cooled off, but not to the point where you wouldn’t want to be outside. The city is bedecked with lights and dazzling decorations, and the streetcars are adorned with wreaths.

The festivities go into overdrive in December and January, so there’s much to choose from for both adults and kids alike. From the traditional Reveillon dinners to the winter-themed festivals and bonfires, you’re in for a spectacle and an unforgettable, unique experience.

Here are our picks on what to see, eat and do if you’re visiting during the months of December and January.

The Krewe of Krampus parade is dedicated to the mythological creature from the Central European forests, rolling through the Bywater, typically on a Saturday in early December (December 3 in 2022), starting at 7 p.m. Krampus and his army of mischief hand out lumps of coal and take great joy in behaving badly.

Three parades kick off the Carnival season on January 6, which is the Twelfth Night and falls on a Friday in January 2023. As usual, Phunny Phorty Phellows ride the streetcar from Uptown to Canal Street and back starting at 7 p.m. The walking Krewe of Joan of Arc parade rolls in at 7 p.m. from Jax Brewery in the French Quarter, and the Société Des Champs Elysée parade takes place starting at 7:30 p.m. on N. Rampart Street and Esplanade, going to the CBD, and following the N. Rampart/St. Claude streetcar route.

Every December (December 15-18 in 2022), the LUNA Fête light show illuminates the Convention Center. The annual large-scale light and sound installations are breathtaking, and the fest is free and family-friendly.

One of those unique opportunities to immerse yourself in wintery activities is the popular and family-friendly festival that celebrates all things Christmas. The annual NOLA ChristmasFest is the only indoor Christmas festival in the area. It also takes place at the Convention Center, kicking off on Wednesday, December 21, 2022, and wrapping on Saturday, December 31, 2022.

Expect giant ice slides, a walk-through maze, and the gingerbread house display among many other attractions and rides. You can also take pictures with Santa, enjoy a 52×140-foot ice-skating rink, and have a snowball fight. Parents can take respite in the “adult lounge” (must be 21 or over to enter) overlooking the ice rink, and some friendly elves will be on hand to help wrangle the kids.

St. Louis Cathedral Concerts is an excellent (and free) annual program that features some of the city’s greatest musicians, representing genres as varied as jazz, indie folk, zydeco, and gospel. The concerts last for about an hour and are held inside the cathedral throughout the month of December. Similarly, the historic St. Augustine church in Tremé also offers a few holiday concerts throughout the month of December.

Also, this time of year Tipitina’s has a stellar lineup of excellent shows on offer. This year, the December highlights include Anders Osborne’s Holiday Spectacular on Friday-Saturday, December 16-17, 2022, and Galactic on New Year’s Eve.

The Fulton Street pedestrian corridor is transformed into a winter wonderland of the Miracle on Fulton Street through the month of December. The free spectacle features light shows, enormous gingerbread displays, festive drinks, and spectacular holiday illumination galore.

Celebration in the Oaks, a beloved New Orleans tradition since the late 80s, had been selling out for years. It is a dazzling holiday lights festival scattered throughout the 25 acres of the City Park, including the Botanical Garden, Storyland, and Carousel Gardens Amusement Park. Stroll through the magical grounds swathed in hundreds of thousands of twinkling lights, take a train ride or a holiday picture by the iconic Mr. Bingle, listen to the caroling, do some holiday shopping, or ride the historic carousel. The event runs starting on Thanksgiving Day through January 1, 2023.

Derived from the French word for “awakening,” Reveillon originally was a meal served after midnight mass on Christmas Eve in Creole households. Today, the tradition has been refashioned into elaborate set-course meals served at some of the city’s finest eating establishments. For a few years now the increasing number of restaurants is participating in bringing special, prix fixe Reveillon menus to the table. The list of participating restaurants includes an amazing roster of the grand dames of Creole elegance like Antoine’s and Arnaud’s, and many of the city’s iconic establishments (Commander’s Palace, Galatoire’s, Tujague’s, and many more).

Some of the best restaurants in the city are also serving up tasty cocktails for Reveillon on the Rocks. Each year local bartenders create both classic and original cocktails to celebrate the Reveillon with holiday-themed sippers. Some of those are offered as lagniappe on the Reveillon menus, others can be enjoyed as a standalone.

The annual Running of the Santas event brings a pack of costumed revelers to the Warehouse District on Saturday, December 10, 2022. The party starts at 2 p.m. at the “South Pole” at Manning’s, followed by the boozy run at 6 p.m. that ends a few blocks away at Generations Hall (the “North Pole”) with more partying and a costume contest.

On Christmas Eve, bonfires will illuminate the levees on the opposite side of the Mississippi River, a spectacular tradition that dates back centuries. Check local newspapers for more information on where to find the bonfires, or ask your hotel concierge.

Not surprisingly, New Orleans goes all out on New Year’s Eve with fireworks and public revelry. One of the main holiday events is the Allstate Sugar Bowl Parade, which is part of the Sugar Bowl festivities. It kicks off at Elysian Fields Avenue and Decatur Street at 2:30 p.m. on December 30, 2022, and rolls through the French Quarter, stopping by for a quick show by Jax Brewery. Expect big floats, marching bands, plenty of throws, and a general overload of glitz and pageantry.

Watch the fleur-de-lis drop at midnight at the historic Jax Brewery during the annual Dick Clark Rockin’ New Year’s Eve, which is coordinated with the same parties in New York and Los Angeles. As usual, it will be live-cast, featuring host Ryan Seacrest. Actor Billy Porter will co-host this year. Jackson Square will also host a free party and countdown with live music and general milling about, culminating with the fireworks over the Mississippi River at midnight. The fireworks can be seen from the East and West Banks of the Mississippi River from the Outlet Collection at Riverwalk to Crescent Park at the French Market.

For some French Quarter-style partying that involves much bead tossing, see if you can score an invite to any of the private balcony bashes, or pay a cover to access one of the balconies at the bars located all up and down Bourbon Street.

For the kids, the annual New Year’s Eve Kids’ Countdown to Noon at the Louisiana Children’s Museum is typically held from 9:30 a.m. to 2:30 p.m.