Events Not to Miss This Spring in New Orleans 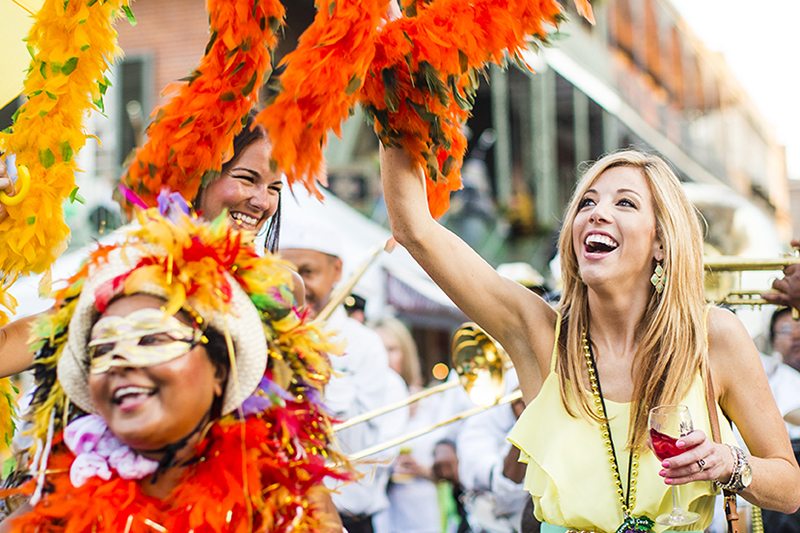 New Orleans loves to throw a party, and this is especially true in the spring, when the weather is pretty much perfect, and there are dozens of festivals featuring the best of live, local music and honoring every type of food we love. There’s something to do every weekend starting in March and through June, and many events are free. Here’s what you shouldn’t miss this spring.

There’s plenty of Irish in this town, so the weekend of St. Patrick’s Day is an important one for the city of New Orleans. Several parades kick off, including a procession that starts and ends in the French Quarter in front of Molly’s at the Market, and the infamous Irish Channel parade, where float riders pass cabbages to the screaming crowds. Also, the Downtown Irish Club Parade rolls from the Bywater to the French Quarter, making several pit stops on its way to Bourbon Street.

The annual gathering of the Mardi Gras Indian tribes is perhaps the most open means of accessing this unique element of New Orleans backstreet culture. You might see the Indians out and about on St. Joseph’s Day (which also falls on Sunday, March 19, 2023), and the tribes will be out in larger numbers on Super Sunday, which usually falls on the third Sunday of March, coinciding with St. Joseph’s Day this year.

While the Mardi Gras Indians have their set routes and parade areas, no one event packs the tribes into one public space like Super Sunday. In this case, said public spaces are A.L. Davis Park, at the corner of Washington and LaSalle streets; and Bayou St. John in Mid-City, at the intersection of Orleans and Moss streets, on the bayou’s banks and the Orleans Street bridge. The Indian procession usually leaves the gathering spot around 1 p.m.

We can’t stress this enough: Be respectful if you go. Take pictures at a distance, and don’t get in the way of marching Indians or their friends, family and attached bands. Super Sunday has been overrun with spectators in the past few years, so please do your part to enjoy this amazing cultural event responsibly.

To learn more about the Mardi Gras Indians please visit the Backstreet Cultural Museum in the historic Tremé neighborhood.

The New Orleans Catholics celebrate St. Joseph’s Day with elaborate altars that are open to the public and communal meals held at Catholic churches throughout the city (and even some private homes). You can usually find the up-to-date list closer to the event in local newspapers and on Nola.com.

The tradition began in the late 1800s, when Sicilian immigrants settled in New Orleans in large numbers. The altars are a thing of beauty, laden with flowers, food, candles, wine, and statues. Because the day honors St. Joseph, who has relieved a famine in Sicily, food is the focal point, and a meal is usually provided as part of the festivities. You can also take some of the traditional Italian cookies with you, along with a prayer card and a fava bean, the “lucky bean” associated with St. Joseph because they sustained the Sicilians throughout the famine.

Also, don’t miss the Italian-American St. Joseph’s Parade on Saturday, March 18. It’s hosted by the American Italian Marching club and starts at 6 p.m. at the intersection of Convention Center Blvd. and Girod Street downtown, then making its way into the French Quarter. The parade rolls with over a dozen floats, several marching bands, and marchers dressed in black tuxedos and doling out silk flowers and lucky beans.

The Tennessee Williams Literary Festival celebrates this city’s love affair with the written word, as well as writers’ love affair with New Orleans. Notable authors will be in attendance, hosting seminars, workshops and lectures. Plus, this being the Tennessee Williams Festival, there is, of course, a “Stella” and “Stanley” contest, which involves folks screaming out the iconic scene from A Streetcar Named Desire to appreciative crowds on Jackson Square.

The city will also host the Saints & Sinners Literary Festival, an alternative literary event that celebrates LGBTQ+ authors. The three-day festival will include panel discussions, master classes, and a fair amount of networking opportunities between authors, editors and publishers.

The New World Rhythms Festival has been combined with the Tremé Creole Gumbo Festival, It’s a celebration of global and local music, and offers both amazing food and a fantastic lineup of music. Held in Armstrong Park and presented by the New Orleans Jazz & Heritage Foundation, this free festival features Mardi Gras Indians, African dance, brass bands, soul-funk, as well as indigenous music of Honduras, and highlife from West Africa. The large art market and a Soul Food Court complete the experience.

Things take a more serious turn with the New Orleans Entrepreneur Week (NOEW). The weeklong series of events is produced by the A.B. Freeman Business School at Tulane University and The Idea Village, and takes place citywide. NOEW features notable speakers, covering such topics as business and innovation

Hogs for the Cause

Another popular March event is Hogs for the Cause, a meat-centric annual fundraiser for pediatric brain cancer held at the UNO Lakefront Arena. Dozens of barbecue chefs compete in seven categories, including fan favorite, whole hog, ribs, and sauce. Check the event’s website for this year’s music lineup and early-bird ticket deals.

Wednesday at the Square

On Wednesdays during March, 2023 dates TBA

Unwind with a cold beverage on any given Wednesday at the Square, a free concert music series held in the spring in Lafayette Park (located one block off of Poydras Street, between St. Charles Avenue and Camp Street) every Wednesday from 5 to 8 p.m., in the heart of the Central Business District. From March through May, these outdoor concerts feature a variety of jazz, rock, swam pop, brass, Latin rhythms, and more. Bring a chair or a blanket, or head to the front of the stage to partake in some dancing. You can bring your dog, and there are vendor booths surrounding the park where you can buy food and alcoholic and non-alcoholic beverages (no outside food or beverages, please).

Next up is the immensely popular French Quarter Fest, also free. Held on the second weekend of April, it’s been around for almost 40 years, featuring the best the city has to offer in food and drinks, and several stages of non-stop live music. In the past years, you could dance in the streets of the French Quarter to Kermit Ruffins & the Barbeque Swingers, Galactic, Rebirth Brass Band, Irma Thomas, Lost Bayou Ramblers, and many more top-notch acts. Expect an excellent lineup this year as well.

The last weekend of April and the first weekend of May mark one of the biggest, most anticipated, and always well-attended events this side of Mississippi. Visitors from all over the world flock to the Fairgrounds for the food and the music of the New Orleans Jazz & Heritage Festival, which is celebrating over 50 years of successful and exciting existence. The music is the focal point, of course, but don’t miss the second lines, the art vendors, and the local food favorites like Crawfish Monica and cochon de lait po-boys. The music schedule will be released in early 2023.

Late spring also brings us Whitney Zoo to Do, an annual fundraiser for the Audubon Nature Institute and the chicest gala in town. It’s held on the Zoo’s grounds and features live music, a silent auction, and food and cocktails from dozens of the best restaurants and bars in the city.

This Mid-City-based music and food festival is held on the banks of Bayou St. John over the third weekend of May. Bayou Boogaloo grew from the post-Katrina scrappy little neighborhood festival to a four-stage, multiple-vendor extravaganza. Since its inception in 2006, the festival now draws upwards of 35,000 people and has become as much a fixture on the festival calendar as its Mid-City neighbor, JazzFest, and the city’s street-party season opener, French Quarter Fest.

Head to the sprawling, picturesque banks of Bayou St. John between Dumaine Streets and Lafitte Avenue to sample some of the best food New Orleans has to offer from the likes of Boswell’s Jamaican Grill and Ajun Cajun plus adult beverages from Pal’s, Pearl Wine Company, and others. The fest’s bucolic setting gives the three-day festival its own unique character. And, just like in the previous years, the festival is pet- and kid-friendly, and has a stellar lineup of live music on its four stages, including the best of the brass bands, zydeco, Mardi Gras Indians, and other incredible New Orleans and Louisiana acts.

Greek Fest takes place over the Memorial Day weekend at the Greek Orthodox Cathedral of the Holy Trinity (1200 Robert E. Lee Blvd.). This annual tradition beloved by locals is worth the trip to Lakeview for its food, music, cooking demos, Hellenic dance performances, and even a toga contest. Expect traditional Greek music featuring bouzouki guitar, dancers in traditional costumes, and kid activities. Greek staples like souvlaki, baklava, spanakopita, and gyro will be served (day and weekend passes available).

March in New Orleans marks the height of the festival season, starting with the annual Freret Street Festival, held in 2022 on March 26. This free neighborhood festival has been growing since the mid-1990s, with about 200 vendors participating and three music stages.

As you can see, the spring season in New Orleans is loaded with activities and events, and with the right planning and the willingness to eat and dance with gusto, you can have the best time the city has to offer!